Scottsdale, AZ – One handed comedian Mike Bolland, who recently started a web series called “How I do things with one hand”, is producing and performing in his first ever “Comedically Challenged” comedy show at the Scottsdale Comedy Spot on Sunday, March 8 2020. This event will feature four comedians who have different life challenges: The Headliner is Mike Bolland, a cancer survivor who was born without a right hand. Also performing their stand-up routines are Chris Cluff, who was recently diagnosed with Parkinson’s disease, Rich Prange, who was born with Jackson Weiss Syndrome (a deformity that affects the face and head) and Zach Tunstill, who has Tourette’s Syndrome . All proceeds after expenses from this

Born without a right hand, Mike has accomplished much in his life: Child actor, Professional Bowler, Inventor, Cancer Survivor and now Comedian.

As a child, Mike played the role of “Danny” in the motion picture “The Trial of Billy Jack”, the third highest grossing film of 1974. As a young adult he became the first one handed person to compete on the Professional Bowlers Association (PBA) tour. In 2014, he founded “Two Fisted Drinker”, a company that creates novelty drinking devices. He has earned three patents related to the devices, and the Two Fisted Drinker Beer Mug has been the #1 selling beer mug on Amazon at various times in its relatively short existence. In 2016, Mike was diagnosed with squamous cell carcinoma, a cancer that attacked the lymph nodes in his throat. After surgery and treatment, Mike has thus far been cancer free. The cancer diagnosis, however, gave Mike incentive to try a quiet passion of his: stand-up comedy. Mike now performs at various places in the Phoenix area, including the Comedy Spot in Scottsdale where he will headline a benefit show he is producing on March 8, 2020. 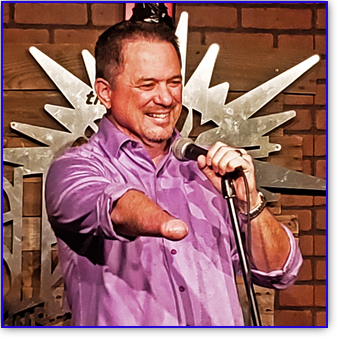