Mike Bolland was born in Montclair, New Jersey and spent his early years in beautiful Hazlet, NJ. There he attended Beers Street School. Fitting for a guy who would later develop a “Two Fisted Drinker” beer mug (more on that later).  The Bolland family moved to Arizona around the time Mike was eight years old.

Within months of moving to Arizona, Mike was selected to play the part of Danny in the movie “The Trial of Billy Jack“. He thought “I love this Arizona! You get to be in movies…” But in reality, they just needed some kid with one hand. When he heard they needed a kid with one hand, Mike raised his (only) hand and lucked into the part.

In 1978 Mike started his bowling journey when a good friend of his asked him to join a bowling league.  He was 13 years old and really never picked up a bowling ball, but by the time Mike was 16 he won his first state bowling title. That title earned him a spot in the Coca-Cola Nationals in Washington, D.C., his first real trip away from home.

Mike Bolland playing “Danny” in “The Trial of Billy Jack”. 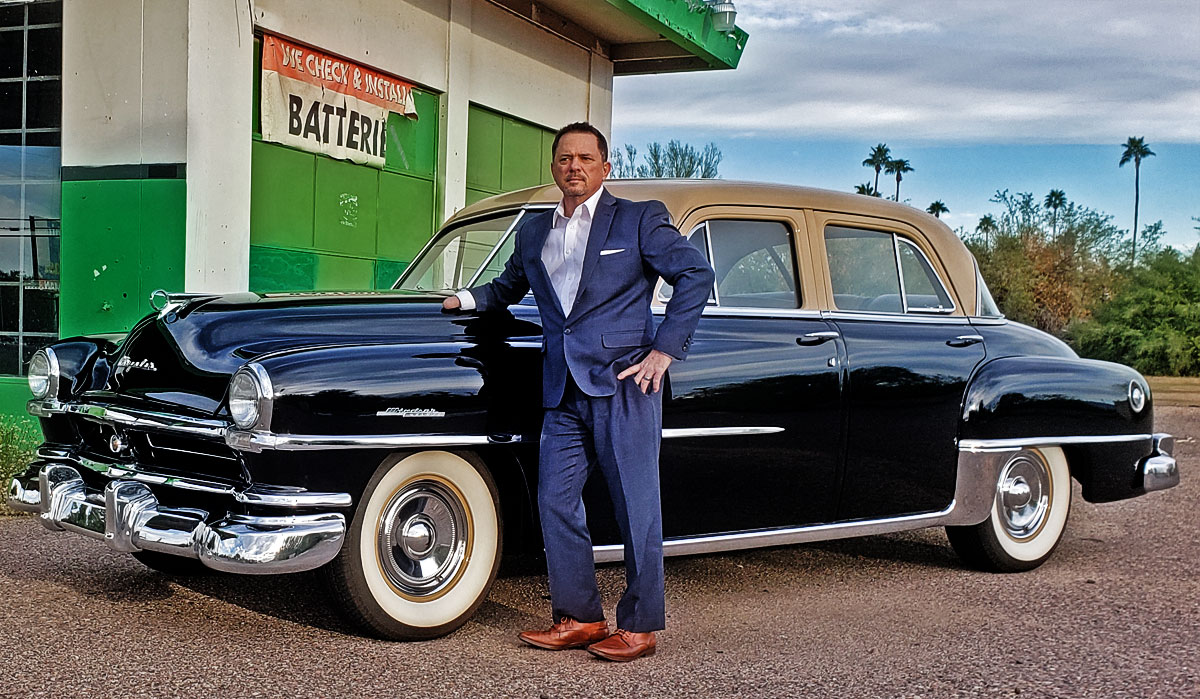 Mike with a car he has owned since he was 16 years old.

In 1986 Mike bowled in his PBA event, the Tucson Open.  He won a spot as an amateur that year and in 1988 by winning both entry tournaments. (He did not bowl the amateur qualifier in ’87). In 1989, Mike officially turned pro making him the first person born without a hand to join the PBA.

His most enduring memory of bowling happened at the Tucson Open in 1990. He started the 6-game block slow, but then started to find his line. By the middle of the third game, he started to throw the ball well. In the fifth game of the block he shot 259, with the last eight strikes in a row. He then proceeded to start the final game of the block with the first eleven strikes in a row.  When he got up to the approach for the last shot of that game, he did so with and 19 strikes in a row. But as he later stated “I thanked God for allowing me to shoot a 300 game in front of my parents who were in the audience. One problem – the game wasn’t over. Overconfident, I let up on my speed and threw a terrible shot, leaving a Greek Church for a 295. )A Greek Church is when you go through the nose of the pins and get 5 pins total.) If you haven’t heard the collective moans of a few thousand people rooting for you, including your parents…let’s just say you are lucky. However, I will say that remains the biggest lesson I have ever learned and I think about it to this day.”

Mike still has a lot of great memories from his bowling days.  His highest finish in a PBA event was second in the 1989 Central Valley PBA Open in Merced, Calif. on the Regional Tour, and he has cashed on the PBA National Tour. However, Mike could never secure a full time sponsor to stay on tour. With the lone exception of bowling the US Open on a whim in 2001, Mike has not bowled since 1992.  He never bowled to be a league bowler; he only aspired to be on tour. With that possibility fading, so did his desire to bowl.

After his bowling career ended, Mike started to look for another career at a company that he could grow with.  Enter Discount Tire. Mike’s start at Discount Tire was very different than most. Uncertain if Mike could do the difficult wok of changing tires with only one hand, Discount Tire provided Mike a way to prove himself by offering him an unpaid/unofficial stint at one of their stores.  After only a half-day, Mike proved himself worthy of the riggers of changing tires and was offered a full time position.  From their, his career blossomed; at different stages in his career Mike ran their eBusiness/web area, their Digital Marketing area as well as starting their Social Media presence, designing their very first Intranet site and starting their Customer Experience area.

In 2016, Mike found out he I had cancer.  After surgery and radiation, he has been cancer free for over 5+ years. The cancer battle was the toughest thing he has ever faced. But just like shooting 295 in front of his parents, he believes these things only serve to make you stronger.

Battling cancer had a profound effect on Mike and caused him to think beyond a career.  In 2022, Mike retired from Discount Tire to give back to the amputee community by doing two things: Starting a nonprofit in his parents name, Joe & Marie Bolland’s Helping Hands, with a mission “to help amputees obtain the prosthetics they need to live a full life.” and start a podcast dedicated to sharing life stories of amputees, the We’re Not Stumped Amputee Podcast.

After cancer, Mike also decided to try standup comedy, and he now performs all over Arizona and across the Southwest.  You can see his event calendar here: (Event Calendar). If you go to one of his shows, you absolutely need stop and say hi. He just prefers it to not be in the middle of his set, however. But he’d love to meet you!

Mike also is the inventor of a beer mug called the Two Fisted Drinker (TwoFistedDrinker.com).  It may sound strange to use the term “invented” when referring to a beer mug.  But he has three patents on the mug, so there’s that! In that business Mike does it all single-handedly: Designs the web site.  Secures product.  Does the books. Designs the packaging… EVERYTHING! It’s been a great learning experience for him. The mug is highly rated on Amazon, and there’s nothing better for Mike than knowing something he developed is being given as a gift and creating smiles. 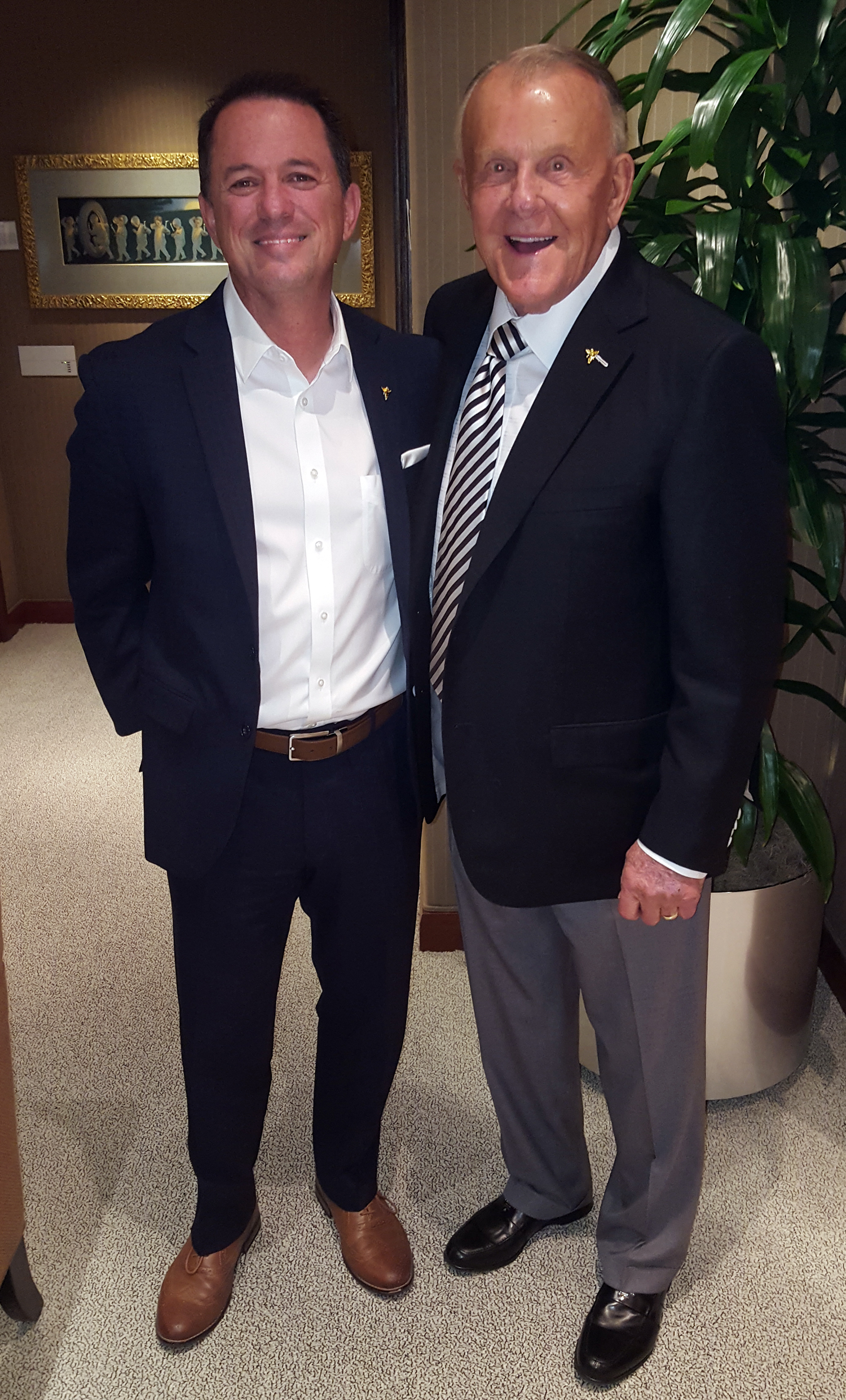 Mike with the founder of Discount Tire, Mr. Bruce Halle.